Hwy 94 is a really bad highway for bicycling. It has chip seal most of the way, with varying shoulder size from 6 inches (ie. “nothing”) to 8 feet. Most of it is high speed single lane with 6 inch shoulder and a lot of debris.  In this part of the state, there are a few chicken farms, and tractor-trailer transports hauling chickens to a few Tyson plants in the area.  These trucks really smell bad (empty or full), and travel very fast.

The hotel I planned for in Lufkin (Storybook Inn) did not exist, and I had to continue on another ~5 miles inside Lufkin loop to the “Motel 6” per my GPS (which also doesn’t exist any more, but is now a Super 6 Inn).  My GPS is not perfect, but this is the first day when it saved me a considerable amount of trouble.

Four cars honked at me today. One after passing, one which dipped into the shoulder and honked about 10 feet behind me, 1 car full of kids in Apple Springs who threw something at me (missed). One short toot after passing might have been a guy I talked to for a while at the Apple Springs Exxon/Subway. He had recently purchased an old panel truck to pull the engine and install into his dune buggy (and trash the truck).

Chip seal most of the way.

It is day 5 and the first day of the trip that actually had a tail wind, for about 5 miles.

Coming into Trinity, I sensed that the front tire was losing pressure, and I pedaled really hard at the end to avoid having to stop and change a tire on the road.

Today I only planned on 21 miles because I am staying in hotels each night and the next hotel is likely beyond my comfort zone.  Despite the short mileage, I feel challenged about the distance for some reason.

When I get to the hotel, I realize that I am quite dehydrated and didn’t recognize it until I was in the room, when I drank a full bottle of water without thinking about it.

I have had a few tough travel days, and even though the weather is nice for travelling, I decide to hang out in Huntsville for a day to work on bike and equipment repairs, route planning and related computer activities. I had a nice “Atkins” lunch and dinner at the Bandera Grill next door.

At departure in the morning, I left, encouraged that the main purpose of the trip was fulfilled, and didn’t fuss about the daily logistical details.  Anything I did from here on was interesting, but additional achievement beyond the goals of the trip.  Hmmm … did I set my goals too low?

About 5.5 miles into trip, the pannier is a little loose, and the right side is caught in the rear spokes, tearing the bag open. Repairs made on the side of the road.  Hooray for duct tape.

At the hotel in Huntsville, the crickets in and around the hotel were awful.  They were in the passageways, the pool, and a couple made it into the room.

Head/cross wind most of the trip.

I had never travelled hwy 362 North of hwy 290 before; this is the start of the “new stuff” for me.  This part of the highway varied between good wide shoulders and none, nice flat pavement and chip seal.  There were a number of hills North of hwy 290 that I wasn’t expecting.  I finished my water, and was resting on the side of the road when a guy in an SUV stopped.  I told him I was a bit thirsty but was otherwise okay.  I asked about any stores on the road ahead (one, about 10 miles).  He left, I travelled on, and we met again at the junction with FM 2, when he returned with 2 bottles of water he had obtained from somewhere.  It turns out he was a coach/trainer for a Texas A&M University women’s sports team and he was traveling with the women for an event somewhere.  While we chatted at the corner of hwy 362 and FM 2, 2 a couple of maroon buses full of student athletes rounded the corner with some razzing – I’m not sure if this was directed at him or me.  Yay TAMU.

A few miles later was the store (Whitehall, TX). A light lunch, rest, water, then head on out!

Highway 105 is a very nice road for cycling – smoothly paved with a nice wide shoulder.

There was still a light head or cross wind for most of the trip.

There were even more dead frogs on the road.

I had a minor collision with a pickup truck (~5 mph) at a gas station just before the day’s stopping point (corner of hwy 105 and 6).

The hotel was nice, and a welcome sight after 52 miles of pedaling.  There was a nice steak restaurant nearby where I had a good “recovery” meal.  Doing 52 miles is a considerable accomplishment for me.

I fixed a flat rear tire at 9.98 miles in, on hwy 90A in the construction barrels at Harlem Rd exit lane (third flat this year on this stretch of hwy). I am only getting 65 pounds pressure from the cheapo portable pump; Memo to self: try to get a real air pump somewhere…

Light headwind from Fulshear to Brookshire.

No conventional roadkill on the highway, but for some reason, there are a large number of dead toads/frogs on the highway, and a weird light odor that I don’t recall from previous trips.  Whatever, I can handle it.

This trip was about 1+ miles longer the last time I did it; I must have stopped somewhere last time or done some sort of loop or something…

I had previously done all of this part of the trip on my own twice before, so wasn’t expecting any surprises.  I was a bit nervous from starting this trip on my own with no backup or support, but the fact that I had done this segment before made it much easier on the soul.

In early 2012, I wanted to go on a relatively short, unsupported cycling trip on my own. In August 2012, it became a reality, when I rode my bike from home in Sugar Land, TX to Marshall, TX, which was 320 miles away by the route I took. 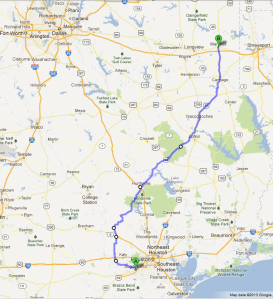 In August 2012, I departed on my cycling trip somewhere “North and/or Northwest”.  I had never done this kind of thing before, and wasn’t sure what to expect.  Really, it was a sort of dry run for perhaps a longer trip if I discovered that I enjoyed myself and didn’t encounter any disasters or showstoppers.  I’d done about 4000 miles of cycling on my road bike either unsupported/by myself, or on rides up to 100 miles a day, which were supported/part of a group.  I planned a route, but didn’t have a specific finish line in mind. I determined that if I made it past 100 miles and 2 nights that it was a success.  Anything after that was additional accomplishment/bragging rights.

When I left home in Sugar Land, I had the following tentative plans/goals:

Enough of all of that.  On with the ride!
Day 1